2003 Annual Meeting of the Archeological Society of Maryland

The Southern Chapter of ASM hosted this year's gathering at the Jefferson-Patterson Park and Museum in Calvert County, Maryland.

The program included a business meeting, the Frederick M. Stiner lecture, and the following talks. For those who were unable to attend, this is what you missed.

Ed Chaney opened the meeting with a welcome and covered the schedule for the day. Julia King presented opening remarks in which she outlined the changing face of Maryland archeology and described the ways that the participants in this effort are working to leave a legacy that will be appreciated by our descendants. The setting of the Maryland Archeological Conservation lab was highlighted as showing the significance of what we do in the field.

Business Meeting - The business meeting started with the usual reports from the membership secretary and our treasurer. Our president, Carol Ebright, offered the annual President's report, covering the myriad activities that the ASM has been involved with over the past twelve months. Among the activities briefed were the Spring Symposium, Annual Workshop in Archeology, the Tyler Bastian Field Session in Maryland Archeology, work with various outside organizations and promotion of archeology among the public of Maryland.

William B. Marye Award - Tyler Bastian presented the William B. Marye award, given for outstanding support to archeology in Maryland. This prestigious award went to Louise Ackerson, a long standing member and supporter of ASM. The Patricia Stine Award for Teacher of the Year was presented last spring to Lee Preston.

CAT Graduation - Nearly three years after launching the Certified Archeological Technician program, The first member has graduated the program and was recognized at the meeting. Jim Gibb, originator of the program, and long time chairman of the CAT committee, presented Annetta Schott with her graduation certificate.

Lectures - Dr. Richard J. Dent - "The Winslow Site: Recent Excavations and Research Update.” Dr. Joe Dent looked back at the accomplishments of the past two field sessions that we have held at the Winslow Site. Despite the extremely harsh conditions this year, many unique discoveries have come from our efforts. They include finding what is probably the first documented evidence of structural features in the middle Potomac area. The discovery of at least two dwelling structures, along with a palisade, a dog burial and other features has made our work at this site a success. Of particular note was the discovery of a human internment in the last days of the session. This finding should serve to illustrate the profoundly human face of the sites we work on.

Frederick M. Stiner Memorial Lecture - Joseph Baker - "A Gap in Time: Context, Archaeology and the Future at Fox Gap.” Joseph Baker, of the Pennsylvania Department of Transportation, presented a comprehensive picture of work that he has been involved with at Fox Gap in the Western Maryland hills. The survey has turned up prehistoric and historic settlement data as well as providing groundwork for a comprehensive land management plan for the area. Included in the relatively small footprint of the area are signs of prehistoric use as well as a 19th century farmstead and a civil war battlefield. This project involved volunteers from the Potomac Appalachian Trail Club in their first foray into archeology.

Behind the Scenes in the Mac Lab - One of the highlights of the day was certainly the tour given by staff at the MAC Lab. We were given an opportunity to peer into the workings of many parts of the lab, including the artifact analysis and computer cataloging projects center, the artifact study collections, the current projects going on in the conservation lab and an overview of federal curation projects that are taking place.

Laura Galke invited us into the artifact analysis and computer cataloging center where she had a wide range of artifacts on display. In addition to showing us the various types of artifacts that are housed in the collection, she demonstrated how the latest computer software can permit the researcher to do detailed studies of the provenience that the artifacts were found in.

Becky Morehouse provided a guided trip through the Archeological Study Collections. This was an opportunity to see both some of the most significant collections in Maryland as well as to see the facility that houses a large number of artifacts from across the state. The study collections allow the researcher to see actual examples of various types of artifacts, making identification and cataloging a much easier task.

Bernard Means illustrated the difficulties of working with Federal agencies to curate and store artifact collections from federal facilities ranging from large sites such as Aberdeen Proving Grounds to small collections obtained from the Food and Drug Administration. He covered both the law involved as well as the practical issues such as conducting regular inventories and obtaining proper funding to maintain the collections. 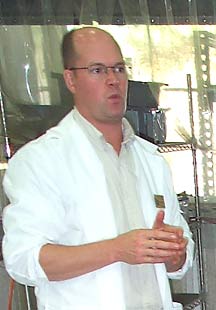 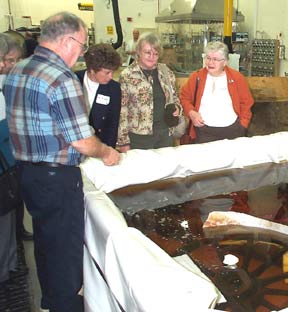 Howard Wellman guided us through the curation lab. He described the processes for preserving artifacts that often are subject to rapid degradation when they are removed from their natural resting spots. Tanks of polyethylene glycol were shown containing artifacts that must be processed over long periods of time ranging from months to years. He also described the process of freeze drying artifacts to aid in their preservation. The bulk freeze dryer is an incredible bit of machinery in itself. This part of the lab is most impressive and is an obvious showcase for the capabilities of the lab as a whole.

Lectures - Howard Wellman - “X-radiography as a Conservation Assessment Tool for Archaeological Collections.”, Maryland Archaeological Conservation Laboratory. Howard Wellman, form the MAC Lab, discussed the application of X-Ray analysis to archeological collections. He discussed traditional uses of X-Ray technology, such as identification of hidden features or for conducting non-invasive inspection of artifacts, as well as newer uses. Those include maintenance of large collections of metal objects. Any metal objects in a collection can be X-Rayed and then those prints can be used to identify objects for further curation. The films produced can also become part of the site documentation and are files with the collection itself.

Lecture - Ruth Mitchell - “A Synopsis of Recent Fieldwork at Historic St. Mary’s City.”, Historic St. Mary's City Commission. Ruth mitchell discussed findings from an archeological survey on a property known as West' Field in St. Mary's City. The site, soon to become a parking lot, is the location where Phillip West built a structure referenced in a 1639 land survey. In addition to possible locations for the house, several other sites were discovered, including an Early Woodlands site. The survey will allow for construction of the parking lot with minimal impact on these significant sites.

Lecture - Silas Hurry - “Creating an Interpretive Landscape in a National Historic Landmark: St. Mary's City.”, Historic St. Mary's City Commission. Silas Hurry recounted the challenges and opportunities encountered in developing an interpretive landscape at the St. Mary's City National Historic Landmark. Thirty years of investigation has provided a vivid picture of life in the 17th century city. this has, in turn, aided in developing the framework for a public interpretive exhibit that covers many aspects of early colonial life here in Maryland. He also present some of the newest features in the exhibit, including a new audio tour program which will provide yet another layer of interpretation for visitors to the site.

Lecture - John Bedell - “Two Friends and the Ambiguous Small Sites of Eighteenth-Century Maryland.”, The Louis Berger Group, Inc. This site, on the Patuxent River in Charles County dates to 1740 to 1770. It was a a small domestic quarter on a large plantation. The excavations revealed a large number of trash pits filled with animal bones and other household refuse. Analysis of the site is ambiguous and it is unknown whether the site was occupied by slaves, an overseer, tenant or some other combination. The results of this excavation, as well as others nearby, suggest that there may be no clear markers that distinguish slave occupations from tenants or owners.

Lecture - Wayne Clark - “A Hundred Years after William Henry Holmes: New Discoveries on the Patuxent River Piedmont.”, Maryland Office of Museum Services. Wayne Clark described the surveys conducted on the upper Patuxent River over the past decade. A search for petroglyphs led to explorations of many rockshelters in the area. Tests on these shelters has provided insight to the habitation patterns of some of the earliest inhabitants of Maryland.